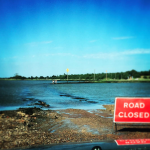 Hello!
As always time has flown since we last wrote a blog entry. Again we’ve mostly been on the road the whole month and  I think I’ll be sharing a lot of photos today! We’ve been in and out of period costume this month, medieval and 1660s; We’ve run Smörgåsballad; we’ve been to the recording studio and we’ve been to Sweden!

At the start of July we had a wonderful gig on the Norsey Island, having to wait for the causeway to clear before we could get to the venue! Watching the sunset from the awning as we played was magical. A couple of weeks later we got to see the island again, but from the air!

We’ve finally recorded the Whispering Road, after touring it for around 2 years. It was a lot of fun to be in the studio. We’ll blog more about that when it’s out! 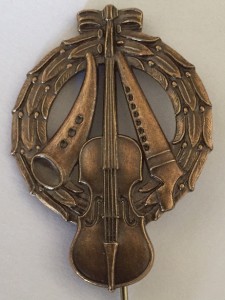 The highlight of the month was going to Sweden to play for the Zorn Jury. Wikipedia explains much better who, what and why we played for. Vicki played on Swedish bagpipes and was awarded the bronze award and Jonny on the cowhorn and was awarded the diplom (one below bronze). You can read our interview with one of the Zorn representatives on their website. (Or a translation using google translate). We’re off to play again for the jury again next year – so you’ll probably be hearing a lot about the säckpipa (or swöö-pööps as they’re now affectionately known). We discovered the wondrous acoustic of playing in a forest, so we’ve posted a clip of Jonny’s practise below.

We’re just as busy in August, but you’ll find us generally in a castle in one of the four corners of the kingdom. Come and say hello if you see us and ask Jonny to play his favourite tune – “I’ve lost my sheep”. We’ll post some photos of castles in our next blog entry! Jonny is doing sound at Sidmouth next week, while Vicki is at home working on some more folk tune books for Schott (nothing like working to a tight deadline!) Jonny has submitted his final manuscript for an accordion version of the Scandinavian tunes book. We’ll shout when we know it’s been printed!

So many things and so little time! Enough babble for now. Have a great summer!
😀
Vicki & Jonny
[fb_button] 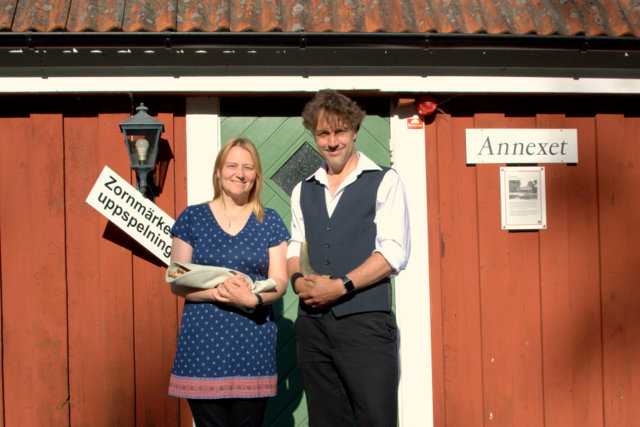