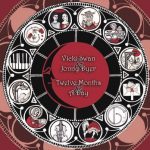 When we started planning this album, we were looking for a theme. An album of traditional songs, perhaps, or dance music or even early music. We quickly realised that any decision to theme the album would force us to exclude much of the variety that we so love playing. Then we realised there could be a theme that would cover all bases. The theme is us – wearing our different hats as we plod through this world doing the best we can. So there is music from our folk club repertoire; music that represents our touring shows; music with a historical perspective, and dance tunes; lots of dance tunes. This is a snapshot of what we got up to in 2018 – and what, with a bit of luck, we will keep doing through 2019 and beyond.

This is dedicated to all those who we share our journey with – from the dearest of friends with whom we share long evenings with a pint, a grumble and a laugh, to those we lightly touch as we pass… We don’t know them well, we barely know their names, but we love them all the same.

Want to Play the Tunes?

CLICK HERE to download a pdf of the tunes from the album.
Then watch the teaching/slow version videos below!
We are building up the teaching videos and adding extra resources on blogger.
So check out the pages here at the SwanDyerMusic Blogspot!

Want to Sing the Songs?

Resources for Radio and Review