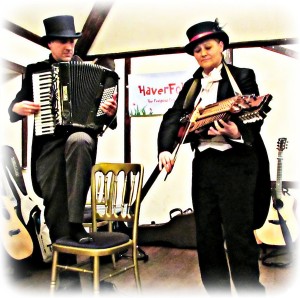 Hello!
We’re now half way through all our Christmas work. It’s been a hectic time running around from Worcester to Salford to the Isle of Wight. In the middle we put out a mail shot and since then we’ve been running a well trodden path to the post box each day with our Christmas album. It’s been wonderful to finally be able to sell the album having recorded it 10 months ago! It’s now getting radio play and has been voted album of the month on two radio stations.

We have the first of our Victorian Winter Warmer Concerts on Monday and we’re really excited. Finally after nearly a month of performing the songs around the country at Christmas Fayres and other Heritage sites we’ll be performing our complete show to a sold-out audience in our own home village! The publicity photos that we’re using for the show were taken at the St Barnabas Church Hall – check out the stop motion video taken by our wonderful photographer Terry.

We’re taking the show to Skirwith in Cumbria and Bretforton near Worcester. So although our Essex show is sold out, you can still catch it elsewhere in the country. Otherwise you’ll have to wait until next year when we take to as many places as we can!

So it’s all systems go, we’re up and down the country, so if we don’t get chance to say it before then.
Happy Christmas everyone!
🙂
Vicki & Jonny
[fb_button]

Summer turned into Autumn and Autumn..

Hello!
It’s been a good time here at Vicki&Jonny HQ. Lots of things are finally coming into fruition. Here’s a little list of  the projects…..

So as you can see we’ve had a really creative time this year, lots of things to add to the Christmas list. We’ve got some new projects lined up for next year with tours being set up. Watch this space – we’ll try to write something a bit more often! 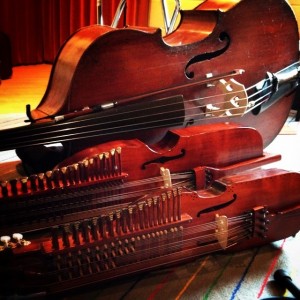 Hello!
We’ve just got back from a 9 day stint of  recording at Wildgoose studio with Hector Gilchrist.  It was hard work, but good fun.  We brought out all the big guns, the car was packed to the gunnels. More nyckeharpa than you can shake sticks at and a really good 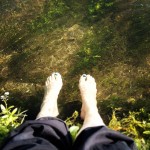 workout for Otto the Oktavharpa. The weather was incredibly hot, so we were grateful for the stream at the bottom of the garden. Now we just sit back and wait to see what comes out at the end of the day.
We’ll let you all know with a teaser track as soon as we get some tracks back.
🙂
Vicki & Jonny 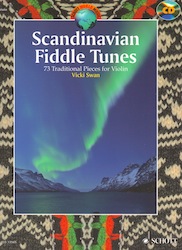 It’s been a long time in the making, we fought bird song, we fought houses being built, we fought old driveways being dug up, but the time is here. It’s time to pre-order Vicki’s new Scandinavian Fiddle tunes book. Of course it’s also very, very good for the nyckelharpa too…. Get your order in now so that we can make sure we get enough copies from Schott as soon as it’s back from the press!

We’re really excited about this book!

The book contains many of the standard favourite tunes in the current Scandi scene in the UK and many more. Freshly harmonised and set for either nyckelharpa or violin.

All 73 tunes are included on a CD recorded by Vicki on the nyckelharpa.

Hello!
On our old website we used to have a few ring tones that you could download and use on your mobile phones. So we decided it was time to bring them back again! So here they are. Download and enjoy!

A Sound of Christmas Past 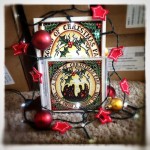 Hello all!
Since we got back from our December work we’ve been beavering away on a new album. We can now reveal that it was indeed a Christmas album. It’s now arrived safe and sound and we can store it away ready for the autumn. Of course we’re going to sell it throughout the summer, so you can visit the ‘Sound of Christmas Past’ webpage and order your copy right now.

Just like Red House you can also buy a book of all the words and music. Our hope is that families will join in with our Christmas Festivities and sing along with the help of the book!

We’ll keep some copies out for anyone hard core enough to get their copy now!

Visit the Sound of Christmas Past webpage.

Hello!
We’ve decided to run an experiment! We started the ball rolling on FaceBook this morning and it went a little bit like this. 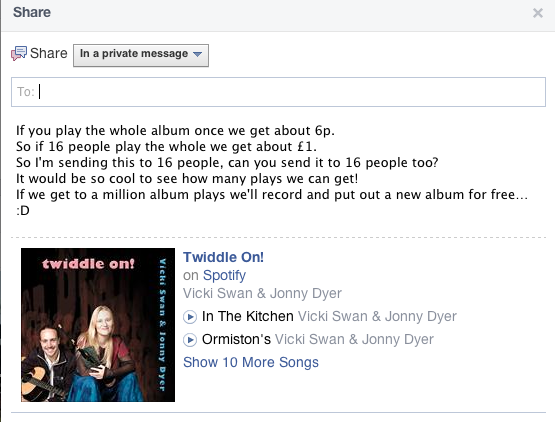 So I duly shared it out to sixteen of my friends. You never know it might just work! If you’d like to join in the fun and listen to and share Twiddle On! I’ve included the spotify link for you.
😀
Vicki & Jonny
[fb_button] 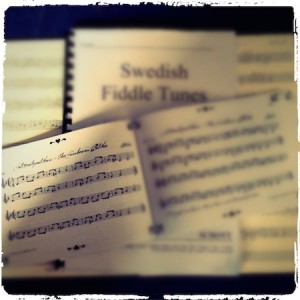 Hello All!
We can’t believe it’s April already! The plan was to have a couple of small recording projects over the winter months and into spring. It’s not quite turned out that way. The new album went off to print this week and just like with Red House we’re having printed material to go with it, that also went off to print shortly after the CD. So we’re into the nail biting time of waiting to see if we’ve sent the hard copies off correctly. The official launch will be in the late autumn, but we’ll be selling it as soon as it arrives… if anyone is hardy enough to want a copy this early in the year.

Vicki has sent her 24 Swedish Tunes book off for a re-print, which is brilliant news. The second edition is updated to include articulations and will be sold with a CD. So the mp3 version will come out of the shop as soon as that is completed. Mastering is nearly finished and should be off to the printers this week. Book II in that series is well under way, but won’t be ready for a while yet. The planned launch will be September to coincide with the International Days of Nyckelharpa in Germany.

Vicki’s other major project is also coming to a finish. It’s been a long 24/7 session of creating another book and recording… more of that when the final drafts have been sent to print, we’ll just say that we’re really, really excited and honoured to be doing this book and give you a little hint.

Hope to see you at one of them. We’ll update again very soon!
love
Vicki & Jonny
[fb_button]

Time to Emerge from the cupboard

Hello!
We’ve just emerged blinking and squinting into the sunlight after spending the last three weeks recording. It’s been fun, but now we’re ready to come out and play again. (Jonny hasn’t quite finished yet, I’ve locked the door and won’t let him out until he’s done!) We’ve put together a little teaser track so you can hear what we’ve been up to. (ok, so we’ve been sneaky with what is on the teaser. This album isn’t going to be released for another nine months yet.) This  album will have the first official outing for the Fnyka Ensemble, which is very exciting.

We’re off to Resonance FM for a live interview and performance tomorrow (24th January) at 2pm. So click the link and listen in! Then we’re off to The Court Sessions in SW18.

Then it’s a Burns night ceilidh, a quick trip to Sweden and back into our box again to finish anything that hasn’t quite been finished.

Then it’s an exciting troll slaying dates, including Coventry and Kettering. So pop along and see us slay some trolls!
😀
Vicki & Jonny
[fb_button] 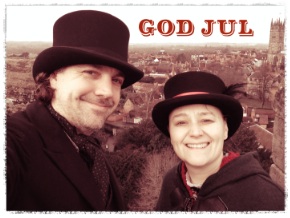 Hello all!
Happy New Year to you all. It’s been a whirl-wind December, from north to south, from the Medieval to the Victorian. We’ve carolled, played tunes and extolled the virtues of the extremely versatile new-fangled keyed-fiddle from  the Northern climes in this year dated 1876.

So 2014 – what’s happening? Well. January is quiet. Mostly we’re recording a new top secret album that won’t see the light of day until next November. An album of music that we’ve become very, very well acquainted with over the last month! I’ve got audio to record for my books, an album to record ready for the celloharpa (really called an oktavharpa) and we’ve both got rather a lot of housework to do having been away from home for so long!

Our next gigs are at the end of January and the start of February. We have a last minute booking in South London at the Court Sessions Club on the 24th January – would be great to see you there! Then on the 1st February we’re at the Folk at the Riverside in Suffolk. Vicki is doing a Swedish Tune workshop. (The nyckelharpas will more than likely be there too if you fancy a go!)

Then we’re on tour for a week with seriouskitchen. We’ve got some really exciting dates all over the country. So for everyone in York, Coventry or Kettering book your tickets now! We’re really excited about all the dates, so come along!!

P.S. We were caught on camera at Salford Quays: