Hello!
After three months in lockdown we’re gradually finding our way in this new online life of ours! We’ve made around 250 videos, Jonny has nearly finished his epic album journeying through different musical eras. We’ve run World Nyckelharpa Day online and now it’s time to do some concerts with a real live audience! We had a wonderful gig for Oxford Folk Weekend last week and it made us realise how much we miss real live audiences! (We knew that anyway!) So we are going to put on a concert of our own probably about once a month. The first of these is going to be Smörgåsballad – Songs and Tales from the Land of the midnight sun. All the details you need to know are below! 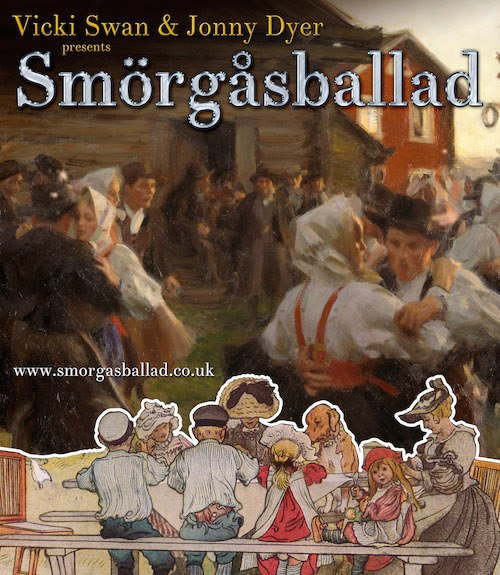 Smörgåsballad is an evening of music and tales from the Sweden. Find out about the tradition of the Easter Witches: What happens if you pick seven different wild flowers and put them under your pillow at Midsummer: The real meaning of the midsummer majstång and participate in some traditional drinking songs in celebration of the crayfish. A visual treat for the eyes and the ears be transported to the land of the midnight sun and enjoy some “nordic noir tales” and fall in love with the heroes and heroines.

Join Vicki & Jonny live from their lounge – freshly converted into a Livestream film studio complete with PA and lighting rig. Using Zoom for maximum audience participation. Only one ticket required per computer, two price levels. £8 for a single person, £12 for a multi person household. Or £8 if you’re a bit strapped for cash, and £12 if you’re not. (you get to choose). We will email you the details of how to join us in Zoom.

Hello!
Unsurprisingly, we find ourselves in the same boat as all other musicians and our entire spring is in the process of being cancelled. We truly hope that this can blow over quickly and it is hope that keeps us going. In the meantime we are keeping ourselves busy. Time to write a new show, put together a new book, practice…. but until we start those we’ve been creative with the camera. Before we went full time as folk musicians we both worked in online education and this gave us a lot of skills. We’ll post updates with the different things we’re doing – but for now below is our Creative Corona Playlist putting together the different videos so far. We’ve set up a webpage with a list of things you can do to help us through this time.
Stay safe out there and see you on the other side!
:))
Vicki & Jonny

Buy me a coffee 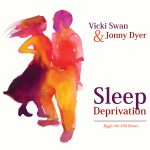 There is one quite large caveat though – this album is designed as one long track, a concept album if you like. There are track marks, so you can start from  the different tracks. But if you listen on digital media it’s possible that there will be gaps put in-between the tracks and this might make it sound a bit weird. So yes, you can listen on digital, we still think that CD is better.

Now that the album is out in digital format we’ve investigated a couple of them and it seems like Spotify is ok, but Youtube isn’t. So choose your media well! (If you find out that iTunes, Google or Amazon are ok, then drop us a line and let us know!) What’s most important to us though – is that our music is listened to, however you choose to listen!

Hello!
February is well underway now and we have gigs and a new album! We were very busy in January and created a couple of videos show casing a couple of tracks from the album. They were a lot of fun to make. Watch them below! Check out our dedicated Sleep Deprivation web page!

We have quite a busy month this month with a little tour to The Netherlands at the end, we’re really looking forward to that! So we hope to see you somewhere soon!

Sleep Deprivation is on its way! 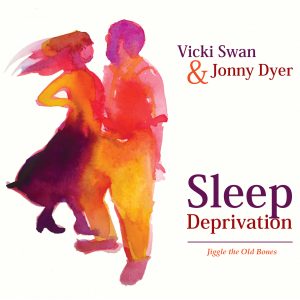 Sleep Deprivation is on its way! Pre-orders are open!

We had a wild idea that we’d like to record an album of dance music that we could sell at ceilidhs and so the idea of this contra dance music album was born. We had a few ideas that we wanted to put into place.

All gigging musicians will be familiar with the long drive home after a gig, those hours driving through the darkness, avoiding the closed roads, stopping at service stations to buy coffee to stay awake. This album is for all of us trying to stay awake on this same road – Sleep Deprivation.
:))
Vicki & Jonny

Hello!
We ended the year with a really fun contradance and although we didn’t manage to get the album sent off and back in time to start selling it at the dance, it has as of yesterday been sent off for replication, so we’re hopeful that it’s going to get back to us before any shenanigans around the 31st January. We will post as soon as it comes back, but we’re very excited about it!

The next bit of excitement was to find out that Vicki has been nominated by Fatea in their Annual Awards Show in the Instrumentalist of the Year category. Totally unexpected and as you can imagine we are totally over the moon to get nominated, so whoever wins on the 10th January, it doesn’t matter – we love that we’ve been nominated!!

We have a quiet couple of weeks – but it is shaping up to be a really busy year ahead including quite a few trips onto the continent – (as you can imagine we are crossing our fingers and having quite a large panic about future red tape.)

So watch this space for news to come!
:))
Vicki & Jonny

Last week of the Christmas Tour 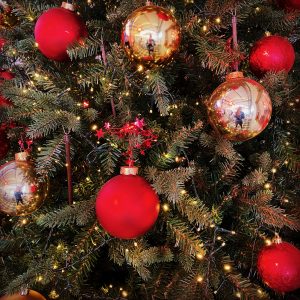 Hello!
We’re nearing the end of our Christmas gigs now – only five events left between now and next year!
We have some lovely medieval work and then our end of tour Christmas gig back in our own village hall. We are sold out for that, so if you’re not on the list I’m afraid we don’t even have space for walk up. Then a wedding and the New Years Eve contra dance.

We had hoped to get the album we’re been recording out for the dance, but touring and Jonny’s voice got in the way of a very tight deadline on that. But we can say that the artwork is 99% done and we’re onto the final mix before it gets sent off. So it looks like it will be back end of January or early February – but you never can tell with these things!

Of course we are going to release it as soon as it’s ready to sell – but there are plans afoot to tie in an official launch around World Nyckelharpa Day, which is Sunday 26th April this year. More on that later though!

Anyway – it’s been an amazing December so far and we hope you all have a great Christmas! We’re already talking in gigs for next December, so if you’d like us to come t0 your club or village hall, get in touch!
:))
Vicki & Jonny 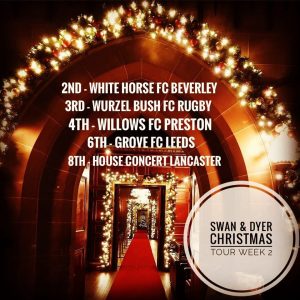 Hello!
Our Christmas tour is well under way! We’ve been to Worcester, Isle of Wight, Beverley, Rugby and are currently driving up the motorway to Preston. We’ve got plenty of dates left this December if you’d like to come and see us! We’re still going north and south, so do come along!

Hello!
We find ourselves at home with roughly three weeks. So we’ve set ourselves a challenge… Can we make a brand new album and have it out for launch at the New Years Eve contra dance that we’re playing at? Realistically – no we can’t! But maybe, just maybe if we really put our backs into it we can do it! (Or at least be very, very close).

If you’d like to see some sneak videos of it you’ll have to pop over to Vicki’s Nyckelharpa Teaching blog where we suspect she might be leaking some tunes onto the web!
😀
Vicki & Jonny

Hello!
Back at the start of July Jonny burnt his finger whilst cooking, luckily it was the back of his finger, which meant that even with a very large bandage on it we were still able to do our gigs. (Swapping out the accordion for piano for the first gig on day 6).
I (Vicki) spent a lot of time looking for images of healing burns at this time to try to figure out a time scale of healing. I found one very helpful picture and thought I should create a similar image to help other people going through what we were going through. So finally a few months later here is the image. It’s quite graphic, so if you are squeamish don’t click the thumbnail. If you’re looking for a timeline of healing though – do click to enlarge and see exactly what happened from dressing change to dressing change. I hope it helps other people looking for information!
:))
Vicki & Jonny